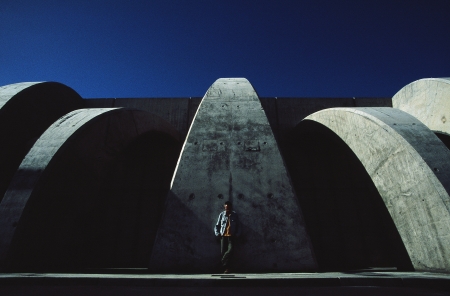 Roland Voss has founded the “Lemongrass” project in 1996 – at times when the world of Lounge & Chillout was an undiscovered open field of creativity, which turned out to be the perfect playground for his manifold musical interest.
In the late 90’s he teamed up with his brother Daniel Voss. Together they founded the project „Weathertunes“ which they are cultivating until nowadays.
During the same period Roland has founded another project named „Jasmon“ resulting from a collaboration with Berlin-based music producer and musician Genetic Drugs.
The concluding album „Spacecake“ which combined electronic breakbeats and dub elements with field recordings from India and Africa was highly acclaimed worldwide.
Further Jasmon albums followed and soon Daniel became a regular member of the Jasmon project as well.

Roland’s musical output is very versatile. Early days reflect his passion for cool rhythmic grooves. But later on also NuJazz, Ambient, HipHop, R’n’B, Deep House, Soul and Lounge made their impact, always subordinated to the concept of the particular release and its stylistic and thematic vision. The „Jasmon“ project is dedicated to world grooves and ethnic chillout.
“This guy has the magic” – a claim you come across quite often when the name “Lemongrass” stands nearby. No surprise really, because Roland Voss always worked hard to make his talents blossom. During the ’70s he played drums with numerous Rock, Funk and Jazz bands. During the ’80s, Roland developed a penchant for electronic instruments. Having patiently honed his skills, it was time for a first record release. His highly acclaimed debut album called “Drumatic Universe” came out on a small German imprint called “Incoming!” in 1997. Soon after one of the hottest Electronic Music labels at that time “Mole Listening Pearls” (a subsidiary of UCMG, today part of the Daredo music group) was so impressed, that they signed him straight away. For many years this has been a fruit-bearing relationship, shooting Lemongrass to the international top league of the scene. At the latest when “Journey to a star” got released in 2001, Roland Voss and his project were everybody’s darling. The song is a timeless beauty considered as one the most influential tracks for modern Lounge music. Over time a few more Lemongrass songs reached this height, such as “Feel Good”, “Elle Et Moi” and “Habla Mi Corazon”.
In 2005 Roland and his brother Daniel founded the label “Lemongrassmusic”, considered as a platform for their own projects and productions. Soon they extended their output with a bunch of talented artists from all over the world. The label kept growing and celebrated their 200th release in the winter of 2015/2016. Needless to say that Lemongrass remained the very center of their work. Brilliant album releases such as “Papillon”, “Filmothèque”, “The 5th Dimension”, “Pour l’amour”, “Hypnosis”, “Sirius” and “Meditation” deepened the project’s international prominence. All in all 17 album releases, 13 EPs, 2 “Best of” and more than 500 compilation appearances speak for themselves.
Along with 7 Weathertunes longplayer albums, 3 Jasmon LPs and some further projects his musical output can quite rightly be called „enormous“
We must not forget the constant output of domestic releases in various countries.
The 4th album “Windows” got released by Water Music Records for the US territory,
Most of the album releases also made it to Russia. After “Voyage au centre de la terre” and “Windows” appeared incredibly on old-fashioned audio-cassettes, “Dreamusic” became a longtime label partner. The Voss brothers are also big in Japan. The label “Receptortune” released 9 albums so far and took them 3x times on live touring throughout the country.