Lemongrass › A Dream Within A Dream

When Roland Voss released his first “Ambient Land” EP in 2007, it wasn’t to be expected that this would turn out to be an open gateway to a new dimension of the Lemongrass universe. Beautifully deep and light as a feather the EP easily found access to the ears and hearts of a large number of people. A stunning mixture of Ambient, New Age, Chillout, Listening and Meditation music takes form as an harmonious whole. Stylistically confident tradition and modernity appear in soothing simplicity and meet a desperate urge of our times for human warmth, harmony and spiritual tranquility.

Lemongrass kept developing this new form of artistic expression in the subsequent publications. Another “Ambient Land” EP and the album “Hypnosis” followed. So is the new album “A dream within a dream”, having the world of ambience as its central manifestation. Indeed it even appears as a concept album. Like dream phases, in which continually rinse new content, 18 songs rise from the space-time continuum. Cosmic beauty is set to music in a weightless ease, leaving us breathless by facing the majestic sound of infinity. Lemongrass manages to keep it all in an open state of wideness by creating a conscious reduction to an accented minimum of structures. No trace of bombast and compulsive technical show-off. The album appears as close and familiar as a good old friend. Roland Voss expresses his obsession with science fiction and the mysteries of the universe not only musically. Just look on the title names and the album cover artwork and it is more than clear, where the journey will lead us to.

For three tracks of the album Lemongrass received prominent support. The Russian singer Jane Maximova underscores the general expression of “A dream within a dream” with her sensitive vocal work in an impressive and captivating way. The well known producer and musician Daniel Voss (Five Seasons, Weathertunes, Green Empathy) helps with technical support. The Voss brothers are jointly leading the fortunes of their record label “Lemongrassmusic” since 2005. In times when Ambient music needs to revive itself by exploring new ways, Roland Voss succeeded by building a soothing bridge. He respectfully bows down before the great tradition of Electronic Ambient music and at the same time uses the almost limitless technical possibilities of the modern era in service of the musical expression of his own innermost galaxies. 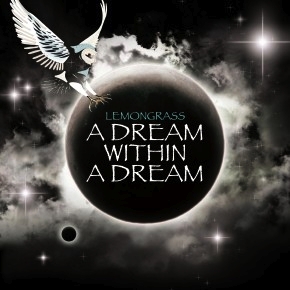