Since his legendary 1999 release „Lumière Obscure“ on Mole Listening Pearls, Roland Voss aka Lemongrass keeps on shedding skins to reveal again and again the most astounding facets of his musical powers. After his 2009 ambient release „Hypnosis“ he surprises once more with his first chill house release „Sans Souci“. Ranging from laid-back grooves to kickin’ beats, the six tracks on this EP explore the world of instrumental chill-house music.

Opening with „Montparnasse“, the EP starts with gentle, irresistible beats and constantly evolving sound patterns. The following „Le Boom“ has a groove with a grin and could also be labeled as „The Kick“. The third offering „Forward“ leads in with a playful note until a nice little break lends a surprising edge to the beautiful groove. Next comes „Easy Rider“ with a heavy bass drum and nicely shaped filtered sounds, a track which should fuel every dance floor around the world. The feathery air of „Beauté“ adds some fine contrasting shades while the concluding track „De Grand Matin“ with its bubble feel and laid-back vibe has an amazingly invigorating effect on the listener.

If you are ready to expand your musical horizon you will heartily embrace this brand-new offering by Lemongrass. „Sans Souci“ comes as sweet, delicious and refreshing treat. 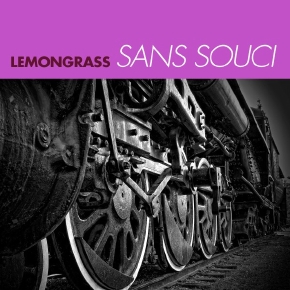