“Great news, Jasmon is back!” Certainly this exclamation will be heard quite often over the upcoming weeks and months. Jasmon lovers are everywhere in the world and quite a few have been desired a new musical output for years. Why is that, what is so special about this project? From the beginning on Jasmon stood for a unique sound, considered as a member of a new generation of modern world music. So far five Jasmon albums came to life. They have been released in Germany, Japan and Russia, which is a clear indication of Jasmon’s global recognition and also an expression of the close personal reference to the Asian region. The debut album “Spacecake” (2001) was a collaboration with the artist and producer Genetic Drugs, enriching the Jasmon sound with elements of African rhythms and trance plus specially recorded Indian musicians and field-recordings while travelling through the country. But already the successor called “Gentle flowers” brought the project to the point. The minimal production aptly recalls the clarity and one-pointedness of the Zen culture and was internationally a great success. Suddenly Jasmon was everywhere. Rarely tradition and modernity of electronic music merged so homogeneously in a creative expression. The following releases “Cosmic Trigger” and “Hammock dreams” have been published on their own label platform Lemongrassmusic. With a stronger connection to Lounge Music, Jasmon added fresh stylistic facets to continue exploring their musical path.

And here it is: “Shangri-La”. As Jasmon’s musicians and producers Roland and Daniel Voss keep pointing out, the long break was not intentional. With patience and the experience of 20 years in the music industry, they know the importance of the creative spark. Once inflamed, the Jasmon sound starts to glow in bright light. Precisely this moment was important to both of them. For the listener it is a blessing and a vital expression of the unique quality of “Shangri-La”. With the courage to let things expand in silence, the strength of the album lays inside. Pleasantly calm and always relaxed “Shangri-La” takes us on a journey. The selection of traditional sounds and instruments is excellent and at the same time extremely variable. Ancient Ukrainian songs meet Indian tabla and sitar. From Japan we hear a Koto harp and Shakuhachi flute, from Thailand a Khim, as well as the Chinese Gu Zheng.

All this is carefully blended into electronic sounds and grooves. An almost invisible audio frame is set with the intention to accompany discretely. Majestically, calm, sometimes with a sweet longing of melancholy, but always atmospherically wide open – this is how the 15 songs appear. “Shangri-La” can open spaces to let the spirit fly. The album is an invitation to listen and to let go. A precious moment of meditation in the hectic events of our day to day life. 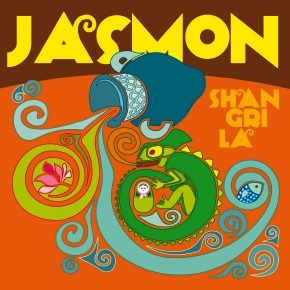