On his 6th rendition of the Lounge du Soleil series, Roland Voss has compiled a host of the most diverse sounds from all over the world. With Carlos Yebra (Spain), T2’n and The angel flies in the sky (both from France), Kondencoutas Pienas (Lithuania), Redlounge Orchestra (Germany), Nowhere (Italy) and PJR Peter Rooke (Australia), seven of the assembled artists make their first appearance, adding new colours to the Lounge du Soleil peace corps.

From Carlos Yebra’s cool downtempo/leftfield approach of „Sea Foam“ to the cinematic offering of Redlounge „Ennophonic“, and from Newton’s soothing „Adore“ to the brazil-flavoured and good-humoured easy listening sounds of $uperchrome’s „Plastic Funk“, you are constantly surprised by skillful changes in styles and vibes.

All those who take most pleasure in vocal tracks should pay special attention to antennasia „Yojigen, Kosa, Shingo, Ikiru“ (Embee remix) and Nowhere feat. Kay Dee the Bee „Odessa“. Whereas the first is an ingenious encounter of Japanese singer san and renowned Swedish hip hop producer Embee, the latter once more underlines the outstanding vocal skills of French singer Kay Dee. Mysteriously seductive and deliciously enchanting!

US project 7b „Butterworth’s“ provide a nice extended interlude with their unobtrusive deep house arrangements before German project Five Seasons take over with their seemingly epic „Got That Feeling“, which then all of a sudden gives us a compelling flute break. The following „From Bombay to Paris“ by French artist Escadet takes over with gentle oriental percussions but then speeds up and leads an imaginary trip to the clubs of Paris.

Other highlights include „My baby laughs“ by The angel flies in the sky, a track which combines the real laughing of a baby with the electronic version of a baby’s musical box and broken beats. Then it’s time for PJR Peter Rooke who in his „Groove Inspector“ knows how to flavour his chill house sounds with a feelgood vibe and and a pinch of 1980s sounds. Swedish project Glam Sam and his Combo once more change directions with their unique mixture of slow-motion funk & soul, carried by a jazzy guitar and some nice horns and organ contributions.

Lounge du Soleil Vol. 6 is probably the most surprising offering of the well-established series. It is a marvellous treasure box of diverse musical approaches from all over the world, arranging the tracks in a way which is most entertaining, delightful and promising: the closer you listen, the more you will salvage. 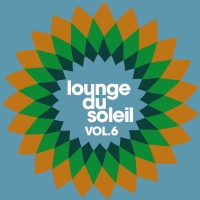