The third edition of sunny download compilation series „Lounge du Soleil“ takes us on another breathtaking and inspiring journey around the world. Among the 16 gorgeous offerings are 11 previously unreleased tracks, introducing new artists like Mo Shang (Taiwan), Karen Gibson Roc (Jamaica/New York), US project 7b, Mark Oakland (Portugal) and Rencause, a side project of Berlin producer Chris Zippel.

Leading into the compilation are Russian Aguaflames whose Brazilian-flavoured „Ya-Fu“ comes as a tender ballad with gentle vocals and laid-back beats. After JetTricKs feat- AdeFunKe & Faye Houston entice you with their subtly orchestrated vocal pop jewel „Lose You“, Rencause makes you dive into warm ocean waves with „Breeze“. The following cross-continental collaboration Tafubar vs. Mo Shang (Italy vs. Taiwan) allows a preview to this years’s upcoming Tafubar album. After two previous LdS appearances, the project here surprises with a spheric intstrumental track. The next counterpoint is perfectly placed with Karen Gibson Roc who with „Some Other Place“ makes an elegant spoken word contribution. Two tracks on the funky side are next to come. While the bouncy beat of 7b feat. Kay Dee the Bee turns „Lucky You“ into an uplifting NuJazz tune, Finland’s Northbound radiate a SlowFunk vibe in best Thievery Corporation style, inviting for an early morning stroll.

The concluding triumvirate of tracks are all on the slower side, starting off with Five Seasons „Love Apple“ which (as Lemongrass remix) sounds intense and simply beautiful. Japanese project antennasia (with producer Manabu Ito aka Nerve and singer San, Japan) makes you immerse into a world of airy melancholy before Lemongrass’ imaginative slow-motion outro „Landing“ sets the mind at ease.

The diverse offerings of „Lounge du Soleil“ are well-balanced and change in speed, style and atmosphere whenever you need it. Compiled with great care and arranged with superior knowledge, the new edition is like a refreshing shower after a sunny day. 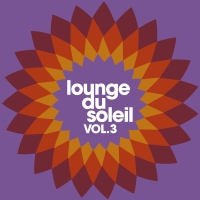