The Lemongrass Garden has kept on growing. Encounters between culture and nature, abstract beats and organic sounds, occident and orient result in a fascinating aesthetic sound experience. The committed gardeners Roland Voss (aka Lemongrass) and Daniel Voss (aka Five Seasons) take the multifarious offerings, throw it into their nonstop mix and create a harmonious piece of art which keeps on flourishing under an eternally blue sky.

The compilation „Lemongrass Garden Vol. 2“ sets new standards in the realm of imaginativeness, playfulness and versatile arrangements. Everything goes – as long as it is good to listen to. If you pay close attention you can feel the smile of the producers behind every single track. One of the biggest merits of Roland and Daniel Voss however is to continually dig new artists from all over the world (France, Italy, Japan, South Korea and U.S.A.) who enrich their unique sound universe.

Outstanding productions come especially at the hands of US project Manalili (with a beautiful vocal track based on feathery D&B beats), and the French project Kay Dee (who adorn the garden with a sly R&B composition). Both tracks go beyond common expectations and add rich new aromas to the new masterpiece of the Voss brothers. Their „Garden Vol. 2“ is as sun-drenched as strangely faded (like old polaroids) and makes the listener indulge in his most beloved memories.

After iëlo has conjured up the blue sky with his intro „Bleu Ciel“, Berlin project Amun „Red Eyes“ define the ground for all that is to come. Their track with whispered vocals and Indian instrumentals sends the listener on an intensive journey full of mysterious drama. The following track „Ayume” by South Korean artist Hana catches with slow motion beats and graceful vocals tripping on dreamy string arrangements. Then a break and some heavy beats… This moment of surprise is one of the key characteristics of „Garden Vol. 2“ as a whole. Again and again, pads are pierced with playful elemtents, smooth sounds opposed with obscure noises and dominant beats intertwined with beautiful melodies. Take Lemongrass feat. Skadi „Habla Mi Corazón“, a rather dramatic tune where all of a sudden an organ takes over to play its sweet melody – which then evaporates as quickly as it has surfaced.

The aforementioned R&B track „Surrender Ur Mind“ by Kay Dee amazes with the rhythmic orchestration of panpipes (!) and urging dance factor – right before iëlo delivers „On Your Mind“, a deep tune heavily accentuated in Lemongrass’ India Mix. Here, the aesthetics of the film noir genre grippingly merge with ethno sounds and club beats. The wonderful vocal track „Beauty Myth“ by Manalili relies on relaxed D&B beats and almost solemn piano notes – a pop song of the highest standards. Japanese artist Yukiko Iiri then takes over with her hypnotic slow motion song reverberating long after it has actually ended.

Of course, the Voss brothers have some great new sounds in store as well, and introduce their new projects Five Seasons and Beach hoppers. While „In Your Town“ combines heavy beats with warm saxophone notes, „Sax on the Beach“ is carried by a bouncy beat and accompanied with the ocean’s murmur. Jasmon’s „Lotus Love“ surprises with the feel of an old-fashioned dance tune (which would support the soundtrack of „Dr. Shivago“) and is countered by obscure samples and underlying beats. Good stuff, indeed.

„Lemongrass Garden Vol. 2“ – the soundtrack for a summer in the city in the garden of your heart. 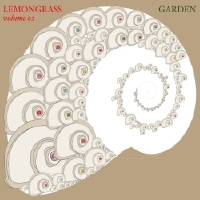