When you enter the exotic garden of Lemongrassmusic you encounter the ingenious diversity of an artfully cultivated park. All songs emanate varying aromas of juicy fruits or scents of rich spices. All selected titles are previously unreleased and exclusive, with the exception of songs by Maria und antennasia which have been released in Japan.

For Western taste, far-eastern blossoms are among the most alluring. That’s why antennasia, a project of producer Manabu Ito aka Nerve and singer San guides us best into the garden. The duo makes it to Europe for the first time after releasing in Japan for over five years. Their lugubrious opening track „Lost“ reminds of early Björk songs while „Sorrow“ also belongs to a world of melancholy but simultaneously has an airy touch. Japanese singer Maria is a sister of Mayu Kawata whose voice blesses the topical Lemongrass album “Ikebana”. Her Song „To Be Happy“ sounds like a modern Acid Jazz ballad crowned with twinkling vocals. Dugsoul aka DJ Nob Tee comes from Tokyo. As his former releases on Mole Listening Pearls, this track is a tasty Jazz and Funk collage which would be the perfect sound track to a Tokyo detective story. Even the eccentric title has a catchy edge: „X-ray Milky Way Murasaki“. Another mysterious affair is the name of Eurasian Macro-system singer Voice.03T. In stark contrast to her technoid name, her classically trained voice comes as a big surprise. The kitschy and monumental arrangement of producer Shigeyuki Nishimura aka S24 takes her to unforeseen hights and makes listeners immerse in a well-designed pond of colourful sounds.

With Torsten Kotter aka Derrick we come across another acquaintance from back in the days: this Berlin artist and producer had contributed to Lemongrass’ very first album “Drumatic Universe”. His Fusion track „Eternal Spring“ excels with pleasant grooves and counterbalances his „Discovering Your Smile“ offered under the project name Amun. The track’s heavy D&B beats and charming arrangements make this tune one of the compilation’s highlights. Must be the smile of an Asian beauty! Maomakmaa is a new plant in Lemongrass’ lush and copious garden. The „Einsiedler“ (i.e. „hermit“) of Berlin producer Erich Lesovsky must have found a stage of enlightenment as the effervescent arrangement suggests.

Lemongrass aka Roland Voss contributes two new tracks: While the jazzy tune “Fritz the Cat” make us feel good with its cheery arrangement, “Feel It“ (feat. Mayu Kawata) takes us straight to the dancefloor. More leg action is triggered as soon as the first beats of „Tuulia“ set in. This Asian House track comes at the hands of another side project of Roland Voss: Jasmon who after two album releases sound as fresh as ever. Under the name of Weathertunes the Voss brothers have been releasing since 1998. Both their tracks provide a first preview to the album “Beam Me In” which will be released in 2006 on Jubilee Records (Germany) and Receptortune (Japan). After last year’s debut album „Terratronica“(released on Receptortune), Green Empathy (a solo project of Daniel Voss) displays his wide musical range. The piano-based track „Kamasutra“ appeals with smooth beats. „Swans“, on the other hand, accelerates and takes us on a imaginary vivacious journey through Japan’s blossoming countryside in spring. Again, both tracks herald the upcoming album “Souvenirs” which is also scheduled for 2006. 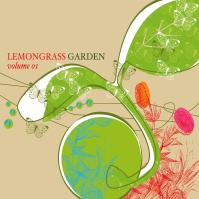