On his second album „Landscape Color“ French producer T2’n invites us to a new adventure in the world of cinematic sound spheres and electronic beats.
The adventure begins with the song „Go My Friend“ – making us observe the planet Earth from a lonely place in the stratosphere.
Approaching the ground you will suddenly be taken to a scene behind the scenes of a theatre, waiting for the curtain to be raised and being filled with the positive effectts of adrenaline running through your organism and creating one of the most electric moments that can be achieved – ready to start the show („Dans Les Coulisses“).
The next track „3 Minutes Avant Le Grand Saut“ draws an image of a man standing on a high cliff ready to jump and dive into the wild blue water.
The adventure continues with facing the realities of aging and death, holding an old woman’s hand, watching her being in a deep coma, waiting for her last breath. In this moment all fears just disappear and there is no more separation between bodies and minds – oneness is coming in when the illusionary borders of personal identity and egoic struggles disappear („Le Desert De Michat“).
With the subsequent tracks you will be taken to beautiful and intensive landscapes and a bit later you will get a glimpse into the world of a man who has lost his identity („Spyman“).
„Dessert Ou Désert“ is like a chocolate drink that you take in a hut in Central Africa – hot and spicy, bitter and sweet…
The second half of the album takes place in the depths of the universe – on other planets that may be inhabited by still unknown lifeforms. It plays with the ideas of freedom and new technologies, merging the visions of mankind from the past and the present.
The final „Appero Mix“ shows a slice of life surrounded by good friends having both funny ideas and hopeful plans.
All in all this album adresses a large variety of emotions – the sad, the joyful, the strong and the tender feelings.
„Landscape Colors“ represents the colors of the creators’ thoughts – aiming to unite the mind and the body and to integrate and to embed the memories of so many mental travels to far away worlds. It creates visions and new ideas.
Are you ready to take the ride ? 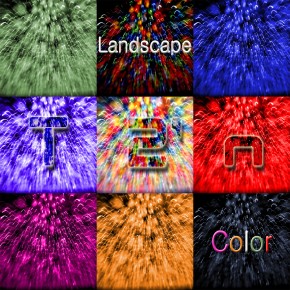