Stuce The Sketch from Nairobi, Kenya is an artist with a truly open mind when it comes to music and creativity. His most recent release, “Rooftop Drums & Strings”, is an amazing example of how his creativity can stretch out and unfold, seamlessly exploring a huge range of musical directions. He often explores various genres, giving his sound a very broad flow that works well in many scenarios. Not many artists are able to embrace such a versatile tone, but it comes as a very natural process for Stuce The Sketch!

The album “Rooftop Drums & Strings” unfolds over the span of 8 mesmerizing tracks. This album is based on the concept of combining traditional instruments with modern urban sounds and beyond. In fact, the songs will take you on a wonderful and exciting journey through so many different musical landmarks. Each song feels like a new destination to explore and marvel at. Stuce The Sketch combines lush Ambient sounds with some deeper electronic textures, but even when he relies more heavily on Electronic sounds, the music still retains a very organic vibe and a lot of warmth, which makes it so groovy and emotionally pleasing. It’s not always easy to make Electronic sounds feel so human and natural, but Stuce The Sketch manages to accomplish that to perfection, while still stamping his own personality on every moment of a track. At times, his compositions have a Trip-Hop / Chillwave flavor to it, which might remind you of artists like Moby or Portishead. In addition to that, the album has a wide range of other influences, ranging from modern Trap to Afro-Beat and pretty much anything in between! However, the overall style of Stuce The Sketch’s music is unique, and it is difficult to compare his work to that of other artists on account of his one-of-a-kind approach to musical composition in general. He doesn’t really worry about sticking to a specific genre, but rather about making music that feels real and emotionally powerful. 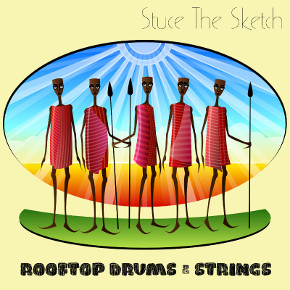