This is the second album of Paul Eerhart – now released on the new Lemongrassmusic imprint “Lemon Jazz Records”.
He combines a loungy feel with Jazz in the style of George Benson, Ronny Jordan, Lee Ritenour etc. There are elements of Samba, HipHop, Salsa, Fusion and Funk to be heard. With these ingredients he creates variety without losing the concept.
The songs consist of strong melodies in combination with Jazz improvisations. This wasn’t possible without the help of his colleagues, who set their big mark on this album. On the first album Co Vergouwen (keyboards, production and mixing) and Mark Eshuis (drums and percussion), were the solid base. On this album Rense Lemaire (bass) also has become a member of this formula, joined by Erik Smans (keyboards), Joost Verbraak (trumpet) and Gijs van Oosterhout (saxophone). During the making of “Urban Jazz Talk” percussionist Jeroen de Rijk joined this adventure as well and contributed to the album.
The digital version of the album contains 13 compositions by Paul Eerhart and is coming out on 19th May 2017 and can be found in most digital download and streaming stores worldwide. The physical version of this CD has 2 additional bonus tracks (covers) and can be ordered by email (paulroberteerhart@live.nl) at the price of € 15.- incl. shipping costs. 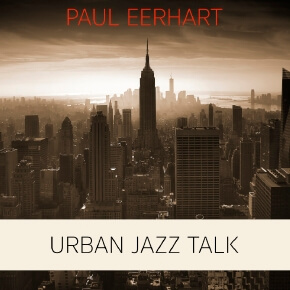