Karen Gibson Roc is an astonishment. This Brooklyn-based (by way of Jamaica and Canada) poet and musician is fierce and fearless. A musical chameleon (she calls herself a “poetist” or poetic vocalist), she combines elements of rap, downtown-diva poetry slamming, and an urgent backing band called Fluid (both for the easy flow of the grooves and the tendency of musicians to come and go). Producers from East and West Coast America, Germany and Japan have contributed some truly nice beats for her that range from jazzy to soulful, with a rock edge that the hip-hop pioneers used to such great advantage. She has been touring live for 9 years by now – and you can hear that in the amazingly relaxed, organic sounds of her beautiful music.

A reviewer of one of her live performances once came to the conclusion that Gibson Roc must have something to do with the preservation of the universe. She has been compared to Gil Scott-Heron, although she is not political, as Scott-Heron was. She is a sloganeer as he was, but in a more personal mode. Neither depressing nor conflict-oriented, her lyrics are impassioned love songs to black heritage, femininity and art. In sweet images she is writing blueprints for Noah’s next arc, and reattaching leaves to trees. Being creative is intensely important to her, and by extension to the rest of the world.

After her 2003 debut album „5 & 2 Fish“, and giving birth to her daughter Jolie Lulu in 2006, she now blesses the world with her sophomore effort „Touching The Soul“. Here, she tells us her story in the aptly titled song „Herstory“. But first she takes the listeners by the hand and leads them into „The Painted Room“, the colourful surroundings of her imaginative vision, with lyrics like „the soul learns more / gathering the courage to explore more / people are learning to grow / learning to let go / and flow“. Another highlight is the third offering „Looking For The Light“ which is as smooth and sophisticated as one could hope for. Here, she ponders with deep earnest: „What could be the remedy / for our global malady / is it to love more and more / from distant shore to shore? / is this the truth we can’t seem to see / Or are we doomed to be never free?“

Karen Gibson Roc manages to ask these profound questions without making them sound too hard to bear. Instead, her songs are so sweet and consoling that you start to wonder how you can ever do without her music. She seems connected to universal love, as she puts it in the song „Who“, and aims at connecting us with the power of love, too. Still, life is not always easy, and Karen Gibson Roc knows it. In „Some Other Place“ she confesses „I need to cry alone sometimes“ and encourages us not to „be afraid to shed a little tear“.

The songs „It’s Time For Less Talk“ (nourished by the legacy of blaxploitation sounds) and „Live Awake“ (a rather dark and grimey approach) reveal a rougher edge to her personality and introduce new flavours to the production side of the album.

Karen Gibson Roc says her main theme “is the evolution of spirit and the truth about following what is your calling here in the physical.” Her objective is “to inspire dream chasing, to uplift hearts, and to open minds.” And that she does. She grabs your soul and never lets go, both through her music, her words, and her spirit. 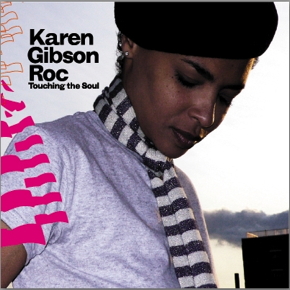