After appearing on „Lemongrass Garden 3“ and „Lounge Du Soleil 4“, Dutch artist Faro finally drops his debut album. His artist name not only refers to his third name, but also pays tribute to the beautiful shores of Faro (Portugal), a place which stimulates him while creating ambient and downtempo music. His African descent is mirrored in recurring ethno elements, and in his mission to unite the worlds of lounge and R&B. Influenced by artists/producers such as Pat Metheny, Afterlife and Rue de Soleil, he has reached a distinguished personal style with roots in both genres.

His music transfers disturbing emotions to a calm and tender place. His tracks either stir up some profound, inner clarity or let you breath in a blissful serenity your peace-hungry soul craves for. Every soundscape on „Shape of Sense“ is different, with a host of images and emotions colouring its realm. But every soundscape is the same in the way of its soothing quality, setting restless spirits at ease. Or as Faro puts it himself: „Music should have an image contained or a story to tell. It should provide space to meditate and dwell on varying cloudy shades, without any disturbance or inconvenience.“

The titles of his tracks are telling. It’s all about love, self-reflection, the beauty of the outer world and the wonders of the inner self. The peaceful eponimously titled „Shape of Sense“ makes you close your eyes, sit back and enjoy, while the sound of the tablas pleasantly keeps you going. „Bridge of Sighs“ best reflects Faro’s effort to combine lounge and R&B music. While the laid-back arrangements seem to prepare you for sonorous, crooning vocals, you gradually drift into your own storytelling. „Clouds“ comes gently dripping into your auditory canals, and from there straight into your soul. „Spiritual guidance“ takes a more serious stance, advising with authority to look after yourself. „Bohemian Dreams“ offers breathed-out vocals, whispering some far-away wisdom into your ears.

Other tracks are worth highlighting, too, but it’s time to stop reading and reflecting, and to start listening and admiring. „Shape of Sense“ is stellar in both its elegance and profundity. Go catch your own wishful star. 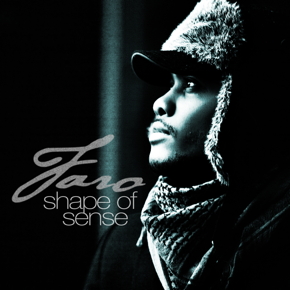