A mysterious man, a master of cinematic soundscapes, this is how Thierry Frossard keeps getting named most commonly. Famous for his breathtaking releases under monikers called T2′n and Marty Bobgarner, he now completes the triangle of his musical vision, by giving birth to his third project “Charly’n Black”.

“Sound design of Ataraxia” the debut album is called, homonymous to Thierry Frossard’s overall concept. Ataraxia is a Greek term used by the philosophers Pyrrho and Epicurus for a lucid state of robust tranquillity, based on freedom from distress and worry. Charly’n Black is set in a dark blue colour, symbolizing the sky and the travelling space, according to Thierry Frossard’s vision.

Travelling with Charly’n Black is adventurous. Moments of heart-melting, utter beauty, often attended with sweet melancholy, are carefully woven with sudden action, euphoria and dynamic beats. The road is unknown, the unexpected is always present. But no matter what the scenery is, Thierry Frossard is guiding you well. He is a director with class, a master of aural cinematography, knowing how to meander through styles and atmospheres to create emotional, pictorial soundscapes.

As on his previous releases, the production is superb with attention to detail. A breathtaking quality and diversity in sound, always in perfect symbiosis with the message of each song. Doubtless “Sound Design Of Ataraxia” is an unique masterpiece, instantly unforgettable. While listening, time stands still in stirring intensity. Go and get your fantasy stimulated! 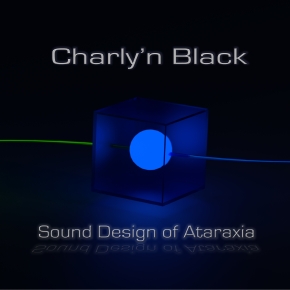