Massimo Lavagnini aka Tafubar is a man of many talents. Besides being a versatile musician, he is at home in the world of horror and fantasy movies. As film maker he directed cult horror comedy “Sick-O-Pathics” (Italy 1996). As a film critic he is about to release his new Fantastic Film Encyclopedia with approximately 10.000 reviews. On his debut album “Changeability”, he explores the field of today’s acid-jazz, chill-house and downtempo genres and assumes an ever-changing perspective to reach unexpected limits. His mission: to create delicate mixtures of sounds by crossing all edges. His deep knowledge of obscure movies result in some of the album’s highlights, with a track like “Last Loungeman On Earth”, referring to fantasy film classics. Other tracks profit from obscure snippets and sounds, creating a strong individual touch and triggering a string of moving images.

The album opens with “Mij Vershe” taking inspiration from an Ukrainian folk song but turning it into a funky thing. The voice of singer Svitlana Damydjuk takes us on a relaxing trip into green forests (i.e. “vershe”). “Last Loungeman on Earth” spoofs Italian cult classic film “Last Man On Earth” (originally “Ultimo uomo della terra” of 1964, last year turned into “I Am Legend” with Will Smith). Here, a man walks alone on the path of lounge music. The title“A Busy Place To Chill” is another cinematic spoof with reference to a classic Italian sleaze from the 1970s (“A Quiet Place To Kill” aka “Paranoia” by Umerto Lenzi). A spatial chillout trip, with a netherworld chorus in the background. “Moments In Hate” pays tribute to Art of Noise’s 1980s classic “Moments in love” but reverses the original idea. “Jaycee Boy” follows as an acid jazz experiment leading to chill-out sensations. “Chillout Special Branch” starts extremely quiet, only to evolve unexpectedly into a very delicate drum’n’bass pattern.

“Garden Of 999 Pleasures” promises forbidden delights, with a lewd flute evoking oriental landscapes. “She Dances Herself To Death” a soft but slightly disturbing chill-house travel, as the sampled voice seems to evoke a sinister atmosphere. The ambient track “The Man Who Had Bad Dreams” brings us inside the head of a humble white-collar experiencing a summer nightmare. Which are the secret dreams of a middle-aged hopeless man? In his sweaty delusions he sees Satan offering him money and power to seduce girls. Watch out for the video clip directed by FX man David Bracci (known from the Dario Argento movie “Mother of Tears” aka “La Terza Madre” of 2007). Then “Trumpeted Love” marks the counteraltar to “Moments In Hate”. Solar house with a delicate, sad trumpet solo. “Re-writable Smile” suggests an interesting point:: a smile can be easily erased when things come out unexpected. A very light and airy chill-house track with an evolving synth solo. “Repossessing the House” hits the house genre with a classic approach of mellow synths and chorus. “Blue Afterlude” quotes some acid house for nice afterhours. “Suona, Suona Mia Sitara” concludes the album with an extremely relaxing chill-out vibe zooming in on a tender and touching sitar. Here, the Sonic Adventure Project Quiet Mix adds a dramatic touch.

After all these rich offerings, Tafubar treats us with a host of compelling remixes. „The Man Who Had Bad Dreams“ (Lemongrass Woolgathering Mix) steps in first with a mellow slow-motion beat bathed in some Asian healing oil. „Constructing The Void“ (Lemongrass Balearic Remix) makes you long for a beautiful sunset at a wonderful beach bar. Smart house track „Thagroover“ (Lemongrass funky housenite remix) comes with a nice’n’mighty groove. „Re-writable Smile“ (Crazy P Solar Disco Affair) provides sun-drenched disco pleasures before the Prèfex Remix of „Repossessing The House“ marks the powerful ending.

The time is right to dive into Tafubar’s universe. His music evokes a world full of dreams, images and ideas. His laid-back but highly sophisticated sound is a pleasure to digest. Get ready to get changed! 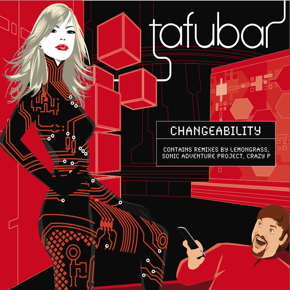