Puch › Welcome To Our Madhouse

PUCH is a three person project by producers Mario Christofferson (alias Dub Mars), Helge Neuhaus and vocalist Tanja Bremner, based in the cities of Herford and Bielefed, Germany.
PUCH love to wallow in memories – inspired by Disco, Funk, Easy Listening/Lounge & Soul of the 60´s and 70´s, as well as musical genres like Trip-Hop, Broken Beats, Dub, Downtempo etc. The combination of electronic and live instruments is the main aim of this band and gives a lot of unique, comforting and melancholic charm to the songs. The songs are often emphasised by the vocals of each of the three members. What started “just for fun” developed to a passionate full-time project today, fusing the hearts of everyone involved to one big whole.
PUCH creates music for relaxing and chilling – but also for a crazy take off on the dancefloor.

Their new album „Welcome To Our Madhouse“ is being released on label Lemongrassmusic in October 2013 and is a very atmospheric, deep and soulful music work.

The opening track Sad but untrue is about mood swings – the scale up and down and in the end: a cleansing summer rain.
Crazy faces tells us about that recurring same old story, the male lust for the female sex. Willed just to build the own ego
Hope:less is a song about the biggest turmoil of heart rhythm finding the balance to breathe, the strength to go on – no matter how hard it is to leave things behind and to step into a large and integral whole.
Carefree says that you can always trust in life – even in the most difficult adversity – and you can know that everything is for its own good.
Which fire did you light can be described with an old quote:
“Watch your thoughts, for they become words. Watch your words, for they become actions. Watch your actions, for they become habits. Watch your habits, for they become your character. Watch your character, for it becomes your destiny.”
Souledge Sleepwalk floating into the soul abyss – and wake up on the other side with total lightness. 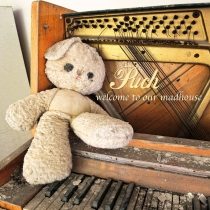