Placid Larry (alias Daniel Ray) is a South African born electronic music producer, currently living in Bahrain where he has been developing his sound and has been working as a resident DJ in a restaurant/lounge since 2007.
His influences are vast – from trip-hop through jazz and house to drum&bass.

He now presents his new full-length album “Melancholy Light” on the label “Lemongrassmusic” – a deeply emotional expression of his very own musicality and philosophy.
The album title “Melancholy Light” is almost like a play on words which seems to point at different directions . The simple thinking behind the album and its title is that of something representing both sadness and happiness, both dark and light.
Melancholy meaning deep sadness and light meaning the source of life – happiness, growth, warmth, understanding.
Sadness that we sometimes receive from living in the world that we do. As well as the overwhelming beauty and happiness that we receive from the world around and within and from those that touch our lives all the time .

The music often consisting of such opposing elements like heavy basses and beats and filigree atmospheres and melodies is filled with these feelings but always with the faith that there is a “light at the end of the tunnel”. A call for intangible hope and a guide to achieve enlightenment through a certain kind of sad reflection on life and its tasks. 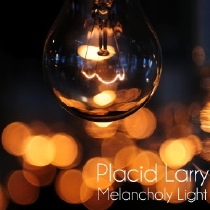