„Sleepy Shuttle“ is a compilation of songs that combine elements of folk and electronic music. Song structures meet loop aesthetics. Acoustic and electronic sounds merge. The listener embarks on a journey through aural worlds. The psychedelic character of this album can be enjoyed as a meditative, mesmerizing, deep-listening experience. Cool, groovy beats, fat basses, psychedelic guitars, hypnotic arpeggios and catchy melody lines make „Sleepy Shuttle“ a suitable choice of music for ambient and chill-out settings and in the case of some songs even clubs.

„Sleepy Shuttle“ is being released on label Lemongrassmusic on October 18th 2013.

Jens and Daniel want to thank everyone that had a part in making „Sleepy Shuttle“. First and foremost the guest musicians and singers: Jele Mensen, Frederik Konradsen and Andreas Weinand (Clarinet). Many thanks to Tobias Trebesius for being a choice dude and designing the cover artwork. Many thanks for financial and emotional support from Kathrin Stryczek, Karl-Heinz Stryczek, Akane Otake, Jörg Meyer, Family Siptroth. Last not least, Felix Ragoss for feedback and guidance, as well as DJ Nartak for friendly support and playing our music. 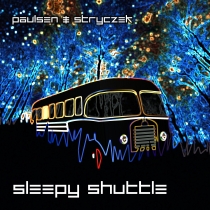