MoShang’s latest full-length release finds the Taiwan-based producer back in the sonic terrain he first explored on “Made In Taiwan” (2004), and delved deeper into on “Chill Dynasty” (2006), the free “Asian Variations” (2007) remix album, and the “Stone Bell” EP (2008). He has since perfected his unique marriage of laid-back beats and cutting edge electronica with traditional Chinese instruments and found-sounds gathered in his Oriental environment. “Further East” provides abundant evidence that the South African expatriate sound jeweler is now completely at home both in Asia and in his distinct sound, by turn hypnotic and dreamy, whimsical with a touch of melancholy, playful and uplifting, and always harmonious.

Still, discerning listeners may be be wondering what it is that makes this album unique, what sets this offering apart from what’s come before – in short, what’s new? In the case of “Further East”, the opposite question gets one far closer to a satisfactory answer.

What’s old? For starters, there’s the gem of a recording that forms the backbone of “Weeping Willow” (track 9) captured on an Edison cylinder in 1902. Though the recording medium shows its age, the singer’s voice still rings true over the 108 years that separate us from her, filling us with an inexplicable longing undiminished by time. And that’s barely scratching the surface in terms of age, for the true crown jewels of “Further East” are far older still.

Much of the lyrical content found on the album are public domain recordings of poetry from the Chinese Tang Dynasty (618 – 907 AD). Speaking to us as they have done to countless scholars over the course of more than a millennium are the voices of the masters Li Bai, Du Fu, Li Qi and Chang Jian. First, discard any notion you may have of medieval poetry in the European tradition. These are not heroic epic poems or tragic legends declaimed pompously to a crowd. The truth is noting short of revelation, for here we have one soul speaking to another, describing the minutiae of everyday life, making small observations that are dropped like stones in the lake of time with the ripples reaching us on the far shore. And so they have become immortal in their clarity and beauty.

Fittingly, Li Qi describes a lute performance on the album opener “Ego & I”.
And the lute plays The Green Water, and then The Queen of Chu.
Once it has begun to play, there is no other sound:
A spell is on the banquet, while the stars grow thin….

While there are hints of the epic on “Further East”, an overriding sense of the intimacy of the poetry permeates the album. It may be too much to hope that the music will display the astounding longevity of its literary inspiration, but here too we have one soul speaking directly to another… listen!

Below are translations of the poetry on the album. Interested listeners are encouraged to explore the collection of public domain recordings entitled “Three Hundred Tang Poems” on LibriVox.org:
https://librivox.org/three-hundred-tang-poems-volume-1-by-various/

Our host, providing abundant wine to make the night mellow,
Asks his guest from Yangzhou to play for us on the lute.
Toward the moon that whitens the city-wall, black crows are flying,
Frost is on ten thousand trees, and the wind blows through our clothes;
But a copper stove has added its light to that of flowery candles,
And the lute plays The Green Water, and then The Queen of Chu.
Once it has begun to play, there is no other sound:
A spell is on the banquet, while the stars grow thin….
But three hundred miles from here, in Huai, official duties await him,
And so it’s farewell, and the road again, under cloudy mountains.

From a pot of wine among the flowers
I drank alone. There was no one with me –
Till, raising my cup, I asked the bright moon
To bring me my shadow and make us three.
Alas, the moon was unable to drink
And my shadow tagged me vacantly;
But still for a while I had these friends
To cheer me through the end of spring….
I sang. The moon encouraged me.
I danced. My shadow tumbled after.
As long as I knew, we were born companions.
And then I was drunk, and we lost one another.
…Shall goodwill ever be secure?
I watch the long road of the River of Stars.

In the pure morning, near the old temple,
Where early sunlight paints the tree-tops,
My path has wound, through a sheltered hollow
Of boughs and flowers, to a Buddhist retreat.
Here birds are alive with mountain-light,
And the mind of man touches peace in a pool,
And a thousand sounds are quieted
By the breathing of a temple-bell.

A cold wind blows from the far sky….
What are you thinking of, old friend?
The wildgeese never answer me.
Rivers and lakes are flooded with rain.
…A poet should beware of prosperity,
Yet demons can haunt a wanderer.
Ask an unhappy ghost, throw poems to him
Where he drowned himself in the Milo River. 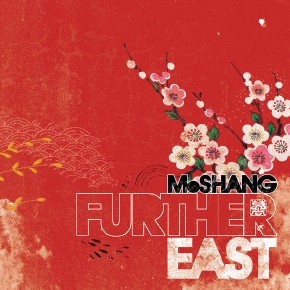