Dub Mars – a storyteller?! Oh yes, he is. Carefully built in 15 chapters, he is providing us an audio journey, which is born out of the very moment, reflecting the presence, past and future. But do not expect any extraordinary issues. The album is meant as a little collection of daily life snippets, which we all experience once in a while, only with a slightly different, personal note. Is Dub Mars telling the truth of life?! Well, Dub Mars doesn’t know if he does, and he doesn’t care. Only the purpose to express the mood of the very moment is what counts to him – whether sunny or melancholic, funny or sad, up or down. Therefore “The Storyteller” is a fine and rare piece of honesty and unadorned human reality.

Dub Mars is a one man show. Mario Christofferson from Germany is “The Storyteller”‘ – a producer, musician, singer and songwriter. Being in the music scene for more than 20 years, he is also the man behind projects such as Hell-g and Cara Mc Queen as well as $uperchrome, Puch, Takt3, Breakfast Brothers, Julienne, Microraum, Mario Santo and many more. Musically his mix of styles is all about Electronica but in various facets. Dub Mars goes beyond cliché and doesn’t care for genre limitations. In this self-created freedom a unique Dub Mars sound has developed. Stunningly it all appears so simple and logical. Obviously this guy knows about the secret of being one-pointed, not wasting time on useless decorating sounds and effects. Only his voice gets a treatment. Vocoder and similar effects add an artificial appeal. Sometimes “The Storyteller” may appear a bit rough sounding but it is always warm-hearted.

Mario Christofferson underlines his poetry with a blend of Downtempo, sometimes even heavy Dope-Smokin’-Beats, various up-tempo tunes melting bits of Dub, Soul, House and Rare Grooves. The warmth of an analogue production is willingly set as an element of style. Some parts are even lo-fi sounding incorporating the approach of simplicity. The album is taking off with a beautiful ballad called “Between the lines”. A dark shimmering love letter perfectly fitting to Mario Christofferson’s silky voice. Followed by “Everything will always be good”, switching to the positivity of a bright day. “Lost in thought” rides on a lovely percussion. Even if Dub Mars doesn’t care at all, “The Storyteller” is musically up to date, cool and hip. It is an album of songs, telling about the beauty and the challenge of human life. If you do not get the message, just get closer and give it a chance once more. 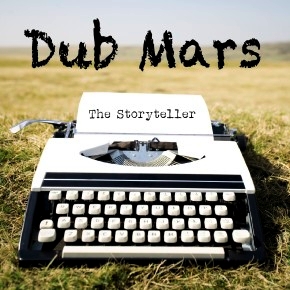